Today, the Federal Reserve Bank of Chicago released April 2016 figures for its Midwest Economy Index (MEI). The MEI is a weighted average of 129 indicators designed to measure non-farm business activity in the Midwest (IL, IN, MI, WI, IA). The MEI captures both national and regional factors driving Midwest growth and the relative MEI provides a picture of Midwest growth conditions relative to those of the nation.

The overall MEI remained unchanged at +0.25 in April. A positive MEI indicates that the Midwest economy grew at a faster pace in April than would be typically suggested by its historic growth rate.

The relative MEI increased to +0.71 in April from +0.67 in March. A positive relative MEI index value indicates that Midwest economic growth was greater than the growth rate of the national economy.

The following chart illustrates contributions to the MEI by sector for Illinois and the Midwest as a whole. 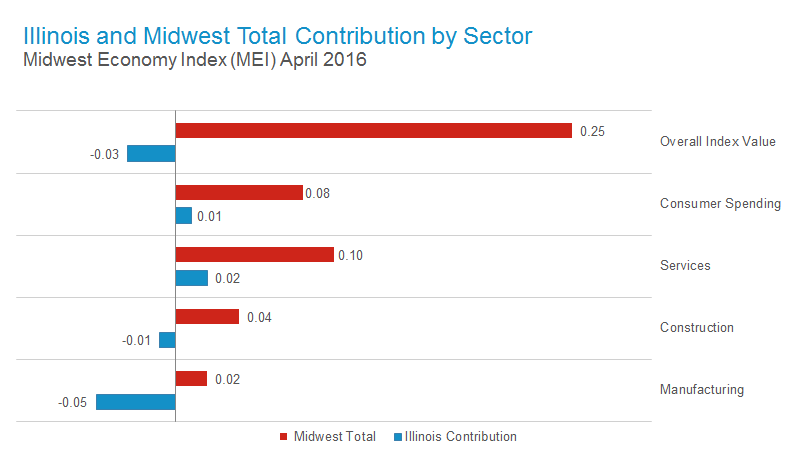 Chaired by Mayor Rahm Emanuel, World Business Chicago is the public-private partnership leading the Plan for Economic Growth and Jobs in order to drive business development, cultivate talent, and put Chicago at the forefront of the global economy.

WBC’s “Economic Briefs” track indicators from month to month to gauge the strength of several aspects of Chicago’s economy, including unemployment, population, venture capital, job openings and new hires, home sales, tourism, etc. This data provides a clear analytic framework for specific Plan strategies and initiatives. For a summary of these and other economic indicators, refer to WBC’s monthly Chicago By The Numbers.